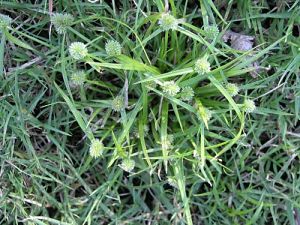 Kyllinga, it may not be a weed you’re familiar with yet, but the quicker you’re able to recognize and control this invasive sedge the better. In the past 5 years kyllinga has recently surfaced as a major problem for lawns across New Jersey. The weed takes on the appearance of nutsedge with smaller and less upright leaves and is always spotted as a collective group in dense mats across turfgrass. Unlike the nutsedge it mimics, kyllinga will always produce flowers despite regular lawn maintenance and mowing as it a low-lying weed. On top of that it’s also very hard to kill and it takes multiple applications. 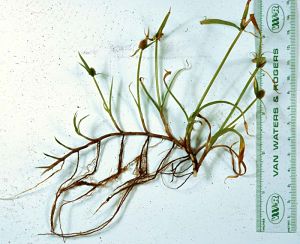 When considering how to tackle kyllinga, it’s important to take a look at how the weed spreads. It moves easily and quickly from landscape beds to nearby turfs in late spring and becomes extremely evident in the late summer months. Growing well in the warm months of late- May through October, it lies dormant in the winter. Kyllinga has both seeds and rhizomes – or underground stems – and can use both methods to spread to neighboring lawns. The seeds (up to 5,000 are produced per season) can be carried from lawn equipment, shoe soles, clothing and even animals, while the rhizomes create a parasitic root system that grows exponentially. If these rhizomes are removed, new plants can grow directly from each chopped section – making reclaiming the lawn a long and tedious process.

It thrives in damp soil that has access to direct sunlight but will certainly make do with partial shade. This makes over-watered yards and those with drainage issues the perfect environment for the pesky invader. It is incredibly resistant to close mowing and can actually flourish while the healthy turfgrass is cut too short and no longer able to compete. It acts as a parasite, turning an otherwise level-surfaced, uniform and aesthetically appealing lawn into an uneven yard with different colors and textures; not to mention forming a weak sod that results in poor footing.

So how do you get rid of the kyllinga plague? Initially it’s less about elimination and more of a management strategy – namely, prevention is key. Keep a constant eye on your lawn, monitoring for new invasions. If solitary patches are spotted, the plant should be removed in its entirety (roots included) and the area watched closely to ensure there is no re-growth. This will result in the need of filling in the area with top soil and seed or a small patch of sod if available. Kyllinga spares nothing, so when it comes to your decorated plants in the garden, be vigilant. It forms a suffocating and dense layer around anything in its path and prevents the survival of many desirable species.

It’s important that your turfgrass is as healthy as it can be to compete against the kyllinga. Dense and well-cared-for grass will put up a better fight as well as provide shading that makes it difficult for the weed seedlings to take hold. Properly managed irrigation and drainage systems can eliminate the moist conditions most suitable for kyllinga growth. Also avoid such conditions by never overwatering your turfgrass.

For those lawns with known kyllinga issues or those past the management phase there is a treatment option available through Green Side Up. We offer management of existing kyllinga through a two-step (sometimes three-step) process. The first step is to apply a chemical herbicide in the form of a blanket spray that targets and stresses kyllinga and other sedges. The second treatment is applied 3-4 weeks later and will further weaken and kill all stressed kyllinga. These treatments can start as soon as late-May to prevent a outbreak, but treatments are available throughout the summer months.

Depending on the severity of overgrowth and the resilience of the weed, a third treatment may be necessary. Additionally, while this treatment rids turfgrass of current kyllinga infestations, maintaining your lawn after treatments is profoundly important as the key to preventing future outbreaks. Thickening the lawn through aeration and seeding is a great tool to use and will replenish any damage from kyllinga. It’s also worth looking into installing a drainage system if oversaturation is an issue in your yard. Diligent attention and monitoring is necessary to ensure kyllinga doesn’t creep back into your yard as quickly as we eliminate it. Due to the increased recent findings of kyllinga across local New Jersey yards, Green Side Up anticipates this will become a routine service rendered from year to year.